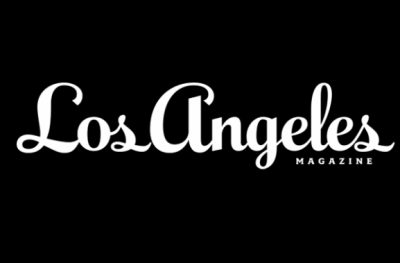 Pan Am may have collapsed in 1991, but that doesn’t mean vintage air-travel enthusiasts can no longer enjoy what was once the largest air carrier in the country. Air Hollywood’s “Pan Am Experience” offers a simulacrum of the Jet Age—and in a style convincing enough to make their “flights” sell out months in advance.

I signed up the minute I heard about these events from a designer friend. I’ve always loved flying, even in its current denatured state, and the thought of experiencing the heyday of jet travel was too good to pass up.

After walking the red carpet, past a scale model of the giant LAX letters that welcome tourists from around the world to Los Angeles International Airport, I am checked in by a member of the Air Hollywood team who directs me to the Pan Am ticket counter inside the hangar. Here I’m issued a replica Pan Am ticket with my name and seat assignment. Having paid for first class seating, I also receive a nifty gold tag for my carry-on. Pan Am carry-ons are for sale here, but I resist the urge. Designer joy is starting to set in.

Our plane is named the Juan T. Trippe, in honor of Pan Am’s original chairman. You may remember Trippe as Howard Hughes’ nemesis played by Alec Baldwin in Martin Scorsese’sThe Aviator. Trippe gave us the airline and the airplane upon which we’re focusing our fandom tonight. He’s also the guy who told Bill Allen at Boeing, “Build me a much bigger plane than the 707.”

If you spend most of your travel time on short haul flights, you forget how enormously powerful a 747 looks just standing at the gate. The lines of the plane are sleek and gorgeous. It has character in a way that other jets can’t match. I’m fully aware that newer planes are better in many ways, but I don’t care—as far as I and my fellow travelers are concerned, the 747 is the biggest, baddest civilian plane in the sky today.

Still, who in their right mind shells out between $275 and $350 for a four-hour flight to nowhere? Looking around the departure lounge I expect to spot air travel geeks and the people who love them, and there are a few. There is also a woman from the toy industry who’d always dreamt of flying first class during the golden age of air travel. She brought her husband. I’m told by the flight crew that many of their passengers are former Pan Am stewardesses, that it’s not uncommon for them to walk on the plane and break into tears.

It’s understandable. Unlike some minor elements in the Pan Am Experience, the plane itself isn’t a replica. Anthony Toth, founder of the company and our “captain” tonight, bought the nose section of an actual 747 years ago and kept it in storage. Eventually he partnered with film studio Air Hollywood to restore it as a film set. Over the years he added the upper deck and a section of Clipper class economy seats. Everything onboard the genuine article, right down to the engraved glasses and the embossed silverware.

Beyond providing a fun night out, Toth’s mission with the Experience is to shine a light on the history of jet travel and particularly on Pan Am. “They were pioneers,” he tells me. “They forged air routes, they created runways all over the world, they commissioned new jet designs, and made flying affordable to the masses. But today there are a lot of people who have no idea what Pan Am was.”

Walking the jetway, it’s clear that you’re not boarding a working plane. Engine noises are piped in, but the subtle vibration of the floor is missing, as are the hordes of people in a state of urgent excitement. But it also doesn’t feel like I’m walking onto a set. I’m greeted by Toth and by a group of stewardesses (all of whom match 1970s hiring guidelines and are trained by hospitality director Barbara Norberg, an actual Pan Am stewardess). Lounge music is playing. And suddenly, I’m inside a plane. There are “clouds” outside the windows. I’m not fooled, but I surrender to the otherness of the space. There is a definite sense of wonder among us all.

The first 15 minutes after boarding consist of the passengers milling about and snapping pictures. We all get to nerd out about the setting, and it makes me wonder why none of the aliens on Star Trek ever pull out a camera the first time they walk into the Holodeck. When I speak with Toth a few days later, he calls this out as his favorite moment of each event.

Then the “flight” gets underway. I’m guided up the iconic spiral staircase into the first class lounge and placed at Table 2: Me in my suit and tie, and two buff guys in jeans and short-sleeved shirts unbuttoned for extra ripple visibility. I’m sure such things existed in the ‘70s, but it is disheartening nonetheless, especially since before the event I received a number of emails asking me to wear period-appropriate clothes. Women were encouraged to wear dresses. No jeans, no sandals, no short sleeves. If you’re going to the Renaissance Faire, don’t wear your gym sweats. Take a cue from the toy designer at Table 1—heels, pleated gold dress, faux fur stole, gloves, and pillbox hat with a birdcage veil.

Luckily, our table is joined by John, a software engineer who’s flown in for the event from Miami. He’s also wearing a short-sleeved shirt and jeans, but he gives off fellow nerd vibes, so I pretend that he’s a beatnik going home to visit his rich, possibly better-dressed parents. The four-course menu, served on an actual Pan Am service, is delicious.

Two hours into the flight, I stretch my legs and amble up to the cockpit, which is set up with real seats and a cardboard photo of the windows and gauges. The whole thing photographs remarkably well, but walking through the cockpit door the illusion stops. The set is open on both sides. I take a turn and my eyebrows shoot up. I’m suddenly standing on a plywood catwalk circling the cabin. After two hours I’d fully acclimated to being inside something—if Juan T. Trippeis not a real plane in flight, it’s not quite not a real plane, either—and seeing the rigging causes a Twilight Zone moment. I carefully re-lower my eyebrows and stroll back inside. Remarkably, the fiction reabsorbs me immediately.

After dinner and a fashion show of stewardess uniforms through the decades, it’s time to land. There’s no change in cabin pressure, no change in engine noise. The crew explains we’re landing, and we accept that they must be right.

Looking back on my trip, I never felt airborne, but I didn’t feel like I was on a set, either. I was part of a performance, a communal improvisation that was catered. For a few hours we all created an alternate space. And in the end there was a dessert course. As it turns out, there is cake in the Twilight Zone.